Today’s “invisible app” market could be classified as a passing trend, but it might also be the beginning of a significant multi-year shift in how we transact when we’re away from our computers. This shift applies to mobile devices, email, home devices like the Amazon Echo, and even wearables like the Apple Watch. In this essay, I begin by explaining why the market exists and highlight some key benefits. Next, I share my mental model of how the market is structured, and lastly, I end by anticipating where it could be headed.

Why it Exists: Speed and Reduced Decision Fatigue

Invisible apps are taking off, because in many cases, they are faster than using a native application or mobile website. While scheduling a calendar event using the native iPhone calendar app takes at least 6 keystrokes, using an invisible app like Clara Labs, you can forward an email or send a message without any context switching. In addition, because invisible apps are asynchronous, you send the message and you’re done.

Invisible apps also reduce decision fatigue, and that is especially beneficial when you, the user, know what you want. For example, looking at 20 different flight options from a pair of airports - 80% of the time, you either want the fastest or cheapest option. That’s one of the key benefits of Operator and Luka.ai: it’s much easier to answer a yes/no question like, “do you want to send your mother flowers for Mother’s Day?” than be faced with an open-ended question like, “Mother’s Day is coming up. What gift should I get her?” This is also the reason why clicks for “mother’s day gifts” are significantly cheaper than what BloomThat would probably pay for an app install.

In fact, reducing decision fatigue drives costs down. For instance, Uber reduces decision fatigue by limiting a user's choices to one of three vehicle classes: UberX, Black, or SUV. That's it. By contrast, earlier companies that attempted to take advantage of excess automobile capacity offered you, the user, a list of cars, drivers, and prices, allowing you to make an offer for how much you'd pay to get from point A to point B. Decision fatigue at its finest. Elsewhere, companies like TaskRabbit initially launched an auction model where you, the user, bid on the person you wanted to provide you a service. They've since switched away from that, but predictably, under such a model, by the time you coordinated the service the person you bid on, you may as well have spent the time assembling the IKEA furniture yourself.

Excessive optionality is a liability and a burden, and messaging apps near-eliminate that by reducing the number of choices, and existing companies are slowly making that shift. Postmates, for one, defined itself as the company where “we’ll deliver anything to you.” Since then, they've shifted focus slightly to: “we’ll still deliver anything, but here are some awesome food choices we can deliver to you within an hour,” and this is one of the (many) factors contributing to their well-deserved success. 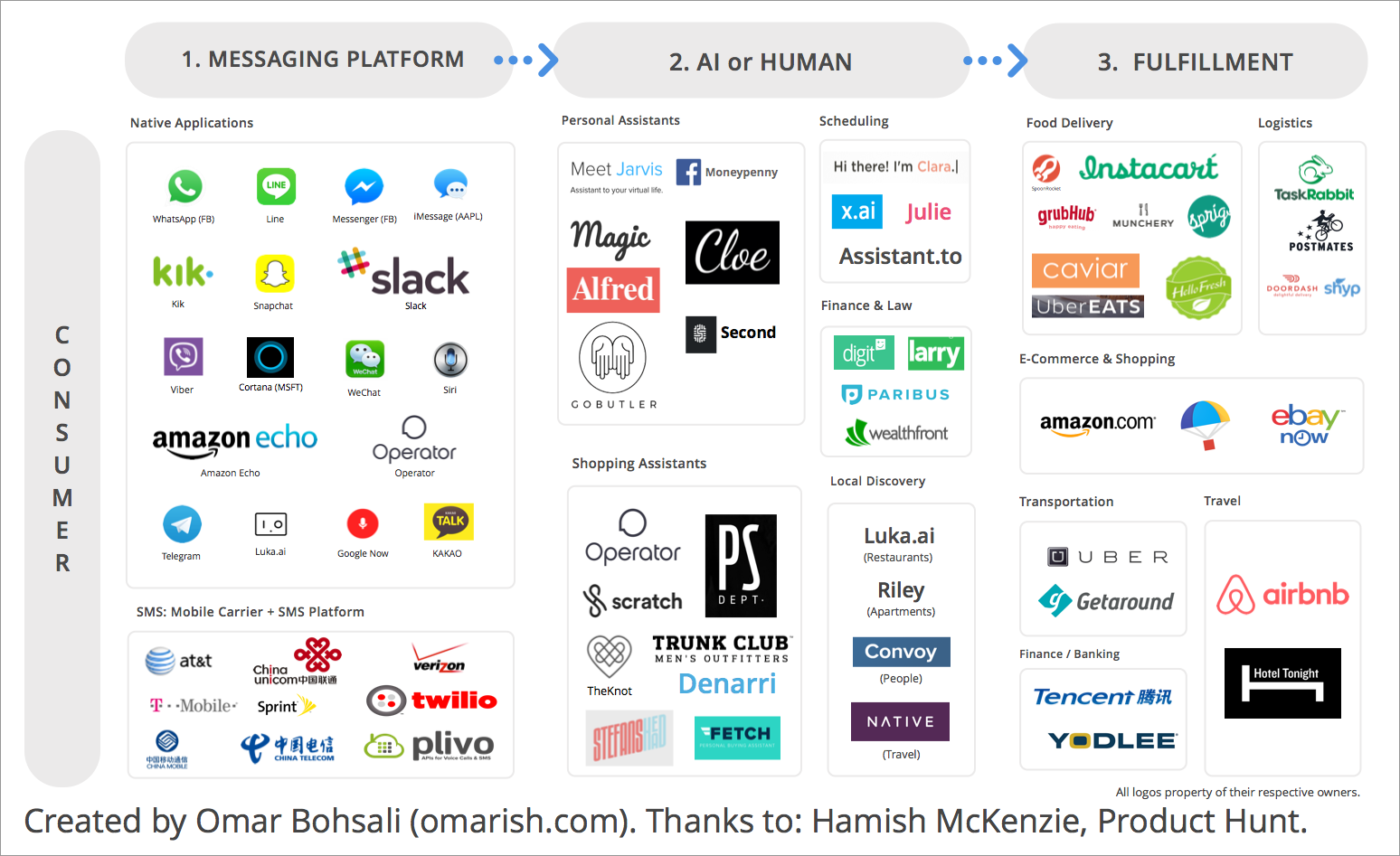 Invisible apps might eventually promote vertical integration, and indirectly, monopoly power. Being the universal top of funnel is extremely valuable: by owning the customer experience, you can exert downward price pressure on suppliers. Let’s take Digit as an example. Digit is an invisible app that automatically moves money from your checking into your savings account. If they keep delivering on the user experience and keep a rock-solid, secure foundation, they could be poised to be the savings bank of the future. I presume they currently store customer funds in FDIC-backed savings accounts at large financial institutions (like Wells Fargo and Citi), but that’s an irrelevant detail to Digit’s customers, who don't need to know where their money is being stored. At scale, Digit could work with whatever bank makes the most competitive terms, or conceivably could set up an independent banking operation, thereby becoming more vertically integrated.

The same applies with many messaging apps in China. WeChat, for example, released WeChat Taxi last year and users booked over 21 million taxi rides in a single month [1]. There’s immense value at being the top-of-funnel for mobile, and I predict the winner will become very successful.

Companies in this space will face a handful of challenges.

First, operator / assistant companies must be differentiated in order for users to stay top-of-mind. By claiming to do “anything” for the user, you end up doing everything decently well, but you fail at staying top-of-mind with your customers. The mobile space is thirsty for such an operation: on the desktop, we’ve come to know “I’ll find you anything” as search; developing such an operation on mobile remains a challenge.

Next, scaling such an operation can be arduous. If you’re lucky enough to have a growth spike, you have to scale operations proportionally. While this sounds like a good problem to have, it is still nevertheless a big problem that could sour many first impressions. Speed is one of the core benefits of messaging services, and if your ssa can’t respond to the user within a timely manner, they’ll likely move on. Therefore, first impressions really matter in this space.

If your company decides to use artificial intelligence and natural language processing - you’re in luck because of the wealth of open source frameworks (python nltk, etc) and APIs (like wit.ai). That said, these will only get you so far. And while boosting your AI’s natural language interface's mean-squared-error from 80 to 82% is an internal cause for celebration, users are much more shrewd. They generally expect things to work all the time, which is hard to do with a natural language product. It also be a resource rabbit hole - getting a model 80% accurate is easy; but the following 10% could take years.

Where it could go

Like most things in Silicon Valley, messaging may just be a passing trend that we look back at in 12 months and laugh. But there’s also a chance that we could be onto something really exciting. Many of the most important technological innovations in the past 50 years were ex-ante novelties with with little business application, that is, until they weren’t. [2]